Kenya will stop the importation of used passenger mini-buses and large buses from July 1, the Kenya Bureau of Standards (KEBS) 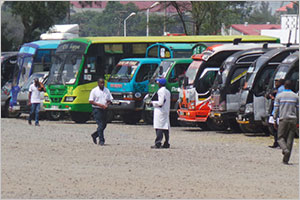 KEBS managing director Bernard Njiraini said the move follows the implementation of new standards meant to boost safety on the roads as well as support local assemblers who produce over 5,000 units annually.

"All used passenger minibus, midibus and large bus, single articulated and bi-articulated and double-decker buses shall not be allowed for importation into the country from July 1," said Njiraini in a notice.
The country has also banned importation of rigid trucks of up to 30 tons capacity.
Njiraini also said tractor heads and prime movers not older than three years since the time of first registration shall continue to be imported into the country until June 2023, where thereafter they will be banned.
He said the east African nation shall continue to import all the other categories of vehicles as long as they are not older than eight years.
Kenya imports an average of 100,000 second-hand vehicles a year, with most of them coming from Asian nations such as Japan, China and Singapore as well as Germany.
According to KEBS, the new measures are expected to aid in the growth of Kenya’s automotive industry.